The Minoan Scientific Tradition: The Way of Nature
﻿

Perhaps tens of thousands of years ago a tribal genius crystallized the thought that since nature seemed perfectly consistent in its workings, it must be governed by a set of unchanging laws. The light of day was always followed by the dark of night in succession, and the sun, moon, and stars moved in the sky predictably from season to season. If this was true, it was asked, "Could these laws be understood by humans?" Boldly assuming the affirmative, he or she may have thought, "If we could learn the language of nature's laws everything could be understood in time." 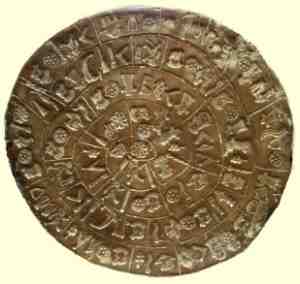 
These beliefs probably involved the intellectual contributions of many people over a long period of time. But it is possible that a single individual in an explosion of Paleolithic intellect conceived and began communicating them to others. The torch had been lit. Human intelligence and curiosity would drive it into the future.

The impetus for these ideas was the desire to lift humanity out of the filth, drudgery, chaos, and brutality of their daily existence. The idea developed that people could begin to remove themselves from the vermin and danger of the natural world by increasing their understanding and knowledge in it. As they achieved greater insight, they could manipulate and transform nature to suit their needs, safety, and happiness.

Communicating these concepts at that time must have been quite a challenge with no writing and inadequate language tools. New words must have been invented to encompass these new ideas. The philosophy of "Nature's Way" became a part of tribal discussion and inexorably spread. Wherever it went, it offered "stone age" people the hope of progress. It became a vital part of the oral traditions passed down from generation to generation.

As more of the tribal thinkers began to take seriously these ideas, people began to intensify their examination of the materials around them. Everything (plants, soils, rocks, etc.) was thrown into the fire or in their pots and transformed by the heat to observe the results. Plants were much more systematically examined for their useful properties. They began to replant and spread the plants they found beneficial to make them more plentiful. As the results of their investigations were exchanged from tribe to tribe and generation to generation, their knowledge persistently grew.

Sometimes great leaps of discovery were made with simple observations. Someone noticed that certain rocks (probably lead bearing ores) left a pool of odd-looking slag in their fire pits. Lead melts at about three hundred and thirty degrees centigrade, and their camp fires could easily reach well over five hundred degrees centigrade. Their curiosity was ignited.

They reasoned that if reality was governed by perpetual laws, the next question became - how can we 'best' gain greater knowledge in them? These new ideas must have consumed a great deal of time in conversations around the fire among the early believers as they began to ask themselves abstract questions like: What is a fact? What is the truth? How do we know what is true? Is there a best way to investigate nature to better gain knowledge?

Eventually, the collective discussions of the philosophers concluded that a fact is simply the way something actually is in nature, and knowledge is what is known to be true about some aspect of nature. Why are things the way they are? Using these fundamental questions, they realized the need for a powerful mental technique to proactively attain knowledge by searching for the 'causes' of things in nature.

It was decided that it was critical that nature's truths be free of the influences of human religious, political, and psychological considerations. The search for knowledge makes no moral judgments. Spirituality, opinions, biases, intuitions, and feelings are strewn with emotional and instinctual components and are simply statements of belief. The philosophers were learning what nature had always been telling them by carefully examining the validity of their facts.

As nature's truths accumulated in their collective memories and reached new heights, people were better able to invent new technologies that improved their lives and those of their children. The philosophers concluded that the search for nature's 'causes' was the only practical and effective way of achieving and sustaining human progress. Nature's method is what their combined mentalities created over time to help humanity to this end.

The goal of the method was to create a conceptual construct that accurately explained some aspect of nature. After much effort and irregardless of their culture or language, their rational intellects were able to coalesce, clarify, and refine the mental tools they needed to find the causes of things:

Empirical Observation - all valid facts are dependent on what is attainable by the human senses and verifiable measurements with the understanding that they have limitations.

Objective Logic - is the study of the relationships between facts for binding them together to reach a conclusion. The conceptual tools used in applying logic to factual relationships are:

Premise - is a set of ideas that support a valid conclusion based on the logical connections of the facts.

Argument - is an effort to discover the validity of a conclusion based on its premises.

Inference - is deriving a conclusion based on what is already known.

Conclusion - is a testable idea derived from the premises of an argument.

Deduction / Deductive Reasoning - is concluding that something is true because it is a particular case of a valid general theory. The theory is the premise. If the premise is true, the conclusion is true. It moves from the general to the particular and is logically valid.

Causality (Cause and Effect) - is the dependent relationship between causes and their effects. Causes always produce effects. Causes are beginnings and their effects the result. Causes always precede their effects in time. The search for causality is, when given a set of valid facts as effects, an attempt is made to discover their causes and the reasons for them. When causes are revealed, new knowledge is born. Causality is the essence of nature and gives the human intellect the ability to understand its workings.

Hypotheses - is a working assumption developed after objective logic has been applied to a set of observed facts to discover their relationships and causes. Experimentation is required to test its validity. If its validity is upheld, it becomes a theory.

Theory - is a conceptual construct that explains all known observations and predicts new ones from it. If a theory cannot explain new observations, the search will begin to replace it with one that does. A single fact can invalidate a theory.

With observation and logic as their basis, they constructed the best method for extracting truth from falsehoods and delusion ever discovered. Samra and the other believers called it the "Method of Nature" or simply the "Method".

The "Method" is a thought process that has the following steps:

Observe - apply empirical observation to some aspect of nature.

Hypothesize - invent a hypothesis that is consistent with the observations.

Predict - use the hypothesis to develop and implement predictions for testing.

Test - the validity of the predictions through experimentation and modify the hypothesis in the light of new observations.

Repeat - the 'Predict' and 'Test' steps until there is consistency between the predictions and observations.

When the hypothesis' predictions are consistent with what is observed through experimentation, it becomes a theory. The theory provides a testable, coherent set of propositions that explains some aspect of reality. A theory's acceptance is based on the reliability of the results obtained through its experimental observations that any doubter can reproduce. A theory assumes an invitation to others to overturn it, if they can. Therefore, it is devoid of bias and is entirely unprejudiced.