There came a time when I decided to build a Google Earth GIS dataset of the archaeological sites listed in John G. Younger's excellent publications:


The Cretan Hieroglyphic Texts
Linear A Texts in phonetic transcription

My original intention was to simply provide a sound educational GIS publication for those interested in the temporal geographical distribution of the archaeological sites associated with the excavated finds of Minoan Hieroglyphics, Linear A, Trojan Script, and Mycenaean Linear B from the Bronze Age Aegean. When I completed this work I was stunned by the realization of just how truly comprehensive and devastating the Late Minoan IB Fire Destruction of Crete was.

Two interesting and relevant papers regarding this topic are:

Science has never been able to adequately explain the Late Minoan IB fire destruction of Crete. It was so overwhelmingly catastrophic that apparently most, or all, of the palaces, towns, and villas in central and eastern Crete were decimated by intensely hot fires. Though damaged Knossos was repaired to a degree and continued to carry on in some reduced fashion. All of the other palaces including Galatas, Gournia, Malia, Phaistos, and Zakros were either destroyed by tsunamis from the Theran eruption or fiercely burned and abandoned forever.

With very few possible exceptions, all of the archaeological finds of Minoan Hieroglyphics and Linear A writing date from about 2200 BC up to the time of the Late Minoan IB destruction event. Only a handful of Linear A finds show up in the period that followed. In the words of John G. Younger, "It is therefore possible that Linear A survived the LM IB destructions, though barely". 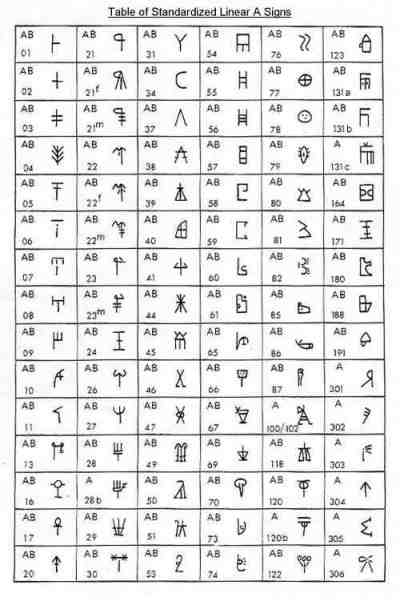 
This phenomenon can be clearly seen in this GIS dataset. The practice of writing was widely distributed throughout central and eastern Minoan Crete. Writing had been well established among the Minoans for hundreds of years leading up to the destruction. The sharp contrast between the many Linear A archaeological sites on Crete before the destruction and the mere two Linear B sites in the Mycenaean period that followed is incredible. What could possibly have caused the end of writing of an entire people on Minoan Crete and yet be so near the time of the Bronze Age eruption? I would sincerely appreciate any comments that anyone may have.

Download Google Earth - Free!
With Google Earth Pro downloaded, installed, and working properly on your computer you are now ready to download the GIS mapping file:

Download the Bronze Age Aegean Scripts GIS Mapping - Free!
Once downloaded simply open it and Google Earth will automatically start up and display the mapping from a great elevation. You can grab the map and move it anywhere you wish by holding down the left mouse button. There are three controls on the upper right of the screen. The top one is for tilting and rotating. The middle one is for panning and the bottom slider is for zooming in and out. Just position an area of interest in the center of the screen and zoom in to see the map's detail. The latitude, longitude, and elevation of your mouse position is displayed on the bottom of the screen. The numbers shown on the right of some list entries below are elevations in meters.